THE DAY IS DONE 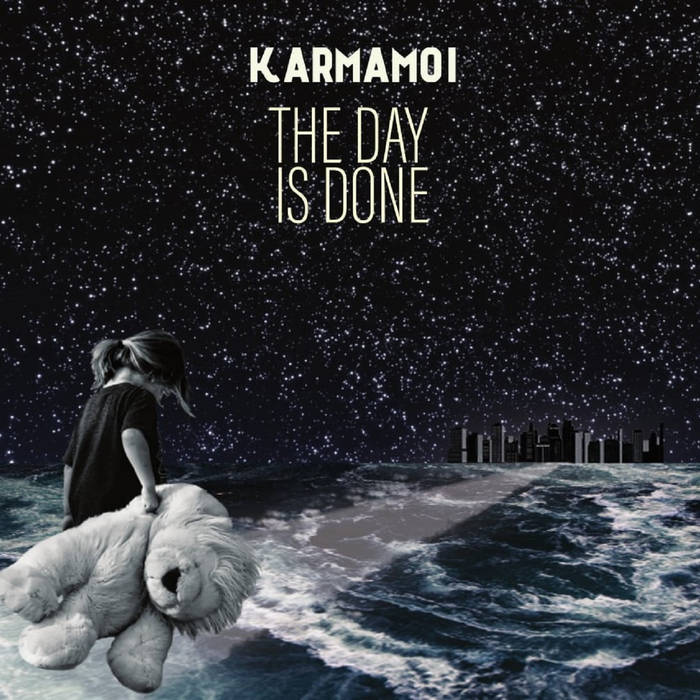 Andrea Weiss The music is calm, balanced and very harmonious. The songs let you slide and take you on a unique journey. Every single note reflects something. I find it difficult to put into words what I hear and feel about the music. It's immersing yourself in another world, immersing yourself in a world of quiet and gentle sounds that make this album so unique and terrific. On the CD I have two songs that touch me a lot: 'PORTRAIT OF A MAN' and 'GETAWAY'. This album is highly recommended. Favorite track: Portrait of a Man.

KARMAMOI
"The Day Is Done" story

We began writing "The Day Is Done" in January 2017 with the idea of ​​experimenting with new sounds and new compositional forms. After "Silence Between Sounds" we felt the need to take a new path but remaining faithful to our overall concept of music: Experimentation, Sound, Melody, Emotion.
Daniele Giovannoni: "I had in mind to write an album that talked about our times, that musically explored the rhythms and pains of everyday life, almost like a sort of self-psychoanalysis. I have always liked to stay informed, reading everything including a wide variety of books to news on the internet, and world events - big and small - are a huge influence of me."

When the Grenfell Tower fire in London took place on 14 June 2017 the writing of the album was already well advanced. 89 people died in the burning of that London skyscraper and among the many stories, we were deeply struck by that of two Syrian boys, Omar and Mohammed, who fled from Syria in the war, finding refuge and a new life in Britain. Mohammed died in the fire and his brother was unable to help him.

Daniele: "This typified my feeling of discomfort with the world. Many of us humans are on the run and living in fear of not being accepted. The two Syrian boys typified this feeling of unease. The terror in the eyes of the survivors of the fire was the same as that of the survivors of a bombing or an attack. Certainly those who suffer a such a bombing know that it is possible there will be another, while those who are victims of a fires can hope that such a thing will never to be repeated, but the desire to escape is the same for everyone."
We decided to tell the story of Omar and Mohammed as example of millions of other stories of life and pain, which led to the decision to give the album a concept. "The Day Is Done" is dedicated to them, to all the victims of the fire of the Grenfell Tower, to all the people fleeing from wars and hunger and to all the people looking for a normal, peaceful life.
Alex Massari: "We had to transform this fundamental idea into music and words, to create a perfect snapshot to allow those who will listen to our album, to enter the atmosphere we created and feel along with us, the desire for normality of those who are terrified."

It was January 2018 when we finished writing the music for album. Initially we had 14 songs and we chose 8 of them to enter into a collaboration with Sara Rinaldi, who wrote the final English lyrics. Living in different cities we found a way to compare ideas and to send demos to each other.

Daniele: "Sometimes the distances between us makes working more complex but I have to say that most of the time it stimulates the imagination. There is a deep analysis of everything we do that often leads us in new directions."

Alex Massari:" Daniele sends me the demos of the songs, I listen to them and we discuss them on Skype. Then I play my guitars, always looking for the heart of the song. I find it a very creative way of working. Obviously, without internet all this would not be possible, and in all probability Karmamoi would not exist, at least in this form."

The recordings began in Rome at the end of March 2018. We recorded the voices at the Latte Più studio owned by Gabriele Sorrentino. After playing at the Winter's End Festival, at the beginning of May 2018 we went to Eynsham near Oxford at the ARC At Abbey Street Studios for drum and guitar recording sessions. It was a wonderful experience. At the studio, Ted, David and the other staff allowed us to be focused and relaxed, letting the music flow spontaneously, without obstacles. Mark Tucker, our sound engineer and co-producer with us on the album, did the rest. Mark is incredible. Having already worked with us on "Silence Between Sounds" he knows perfectly exactly what we want. Mark is our sound creator, who transforms what we create into the sound of Karmamoi.

Daniele Giovannoni: "I met Mark a few years ago when I visited his studio to record the drums for a folk-rock singer. We immediately hit it off after, and after I gave him a demo, I suggested he work with us on the Karmamoi project and he accepted immediately. It was fantastic. To think - the sound engineer of Jethro Tull working with Karmamoi. Incredible."

" The Day Is Done" is a story that accompanies the listener through the lucid madness of a reality that we often do not want to see. It is a raw portrait, which via composition, sound and lyrics makes us aware of who we are and what we probably would not want to be. On "The Day Is Done" there are many great musicians as guests, among them Colin Edwin (Porcupine Tree ) and Geoff Leigh (Steven Wilson, Ex-Wise Heads).

Daniele: "I met Colin last year at a drumming festival in Milan where he played with his band. We kept in touch and when I later asked him to play on the new Karmamoi album, he said 'yes', saying that he liked the project very much.”
At the time of writing, we have received the final mixes from Mark. When we listened to our finished work we did not hide our emotion. Now the album is ready to go to print. We are very eager to let you listen to it, in the hope that it will move you and excite you in the same way it does us. "The Day Is Done" will be released by "Sonicbond " and distributed by "Nova" via "Plastichead"

Alex: "' The Day Is Done ' is definitely the best album we've made so far”
Daniele:" I totally agree with Alex "

Feat:
Colin Edwin ( Bass ) on “Take Me Home”, “ Your Name” and “Mother's Dirge”
Geoff Leigh ( Flute ) on “Take Me Home”
Alessandro Cefalì ( Bass ) on “The Day is Done”, “Portrait of A Man”, “Getaway” and “Running Through the Lands”
Sara Rinaldi ( Main Vox )
Emilio Merone ( piano ) on “The Day Is Done” and keyboard solo on “Mother's Dirge”
Luca Uggias ( Piano ) on “ Take Me Home” and “ Portrait of a Man”
Lara Bagnati ( Flute ) on “The Day Is Done”
Valerio Sgargi ( Rap ) on Mother's Dirge
We want to say Thank you to Rosy Sanchez and Aloys Martens for their support
Recorded Between Italy and UK : February 2018/July 2018
Daniele Plays : RV Drums

THE DAY IS DONE is the fourth studio album out on 30th Nov 2018
THE DAY IS DONE is a concept album inspired by the story of two siryan brothers. One of the brothers died in Grenfell Tower fire, happened in London on 14th June 2017. This album is dedicated to them, to all victims of Grenfell Tower tragedy and to all people who are forced to run away from their country because of war and poverty ... more

Track Name: The Day Is Done
THE DAY IS DONE

I am on my way
I 'm heading Home
I'll see you there
I made some food
Miss Erin show is
On Tonight
Come sit back
Relax
Enjoy yourself
When the day is done
Consider this  be in grace
We are safe in here
I hear you man
I am glad we came
Go get some rest right now
Silent your mind
See you
Tomorrow
Blinking Light
Goes on and off
Seal the deal
I can't go wrong
Will i wash the image of you
My blood down the stairs
You Might in grace
The peace of we craved
By now I still live
You are Gone
You are gone
The best was yet to come
You left our land to burn in
Grenfell
Track Name: Take Me Home
Take Me Home

Hit the desert
Syria has left in and out
Moving forward
Our new life to come
Track Name: Portrait of a Man
PORTRAIT OF A MAN

Say your name
On 3 ready
Stay with me
Clear
Pressure gauge
Need him stable
Stay with me
Clear
Nowhere to run
Clouds pouring out
Some Fuel from above then
Fire on the walls
(Just like )
Hell on the earth
Your name your name ...
Hands off him
No bit here
All of you
stand clear
You do not know the life you ain't lived
You cannot talk the choice you ain't taken
Track Name: Mother's Dirge
Mother's Dirge

Bandcamp Daily  your guide to the world of Bandcamp